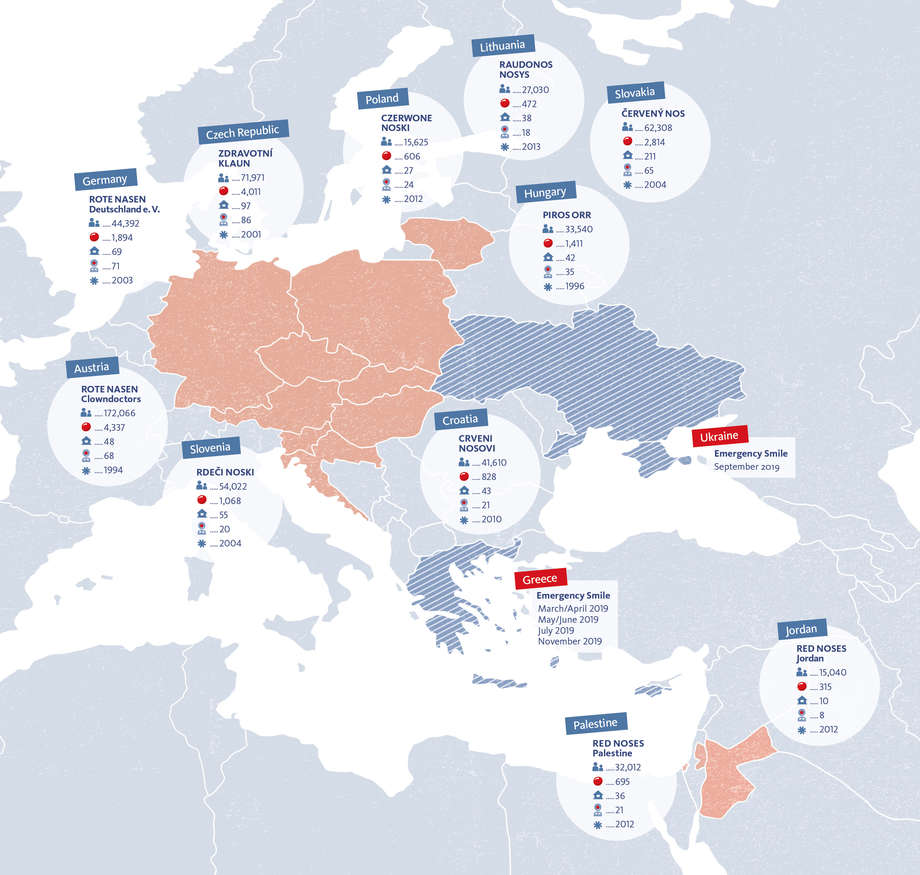 RED NOSES Clowndoctors was founded in 1994 in Austria as a non-profit organisation, bringing humour and laughter to people in need of joy. In 2003 the charitable non-profit foundation RED NOSES Clowndoctors International (RNI), also based in Austria, was established as headquarters of the RED NOSES group. Its tasks are to build up, monitor and support international RED NOSES local organisations. In doing so, RED NOSES International simultaneously develops and maintains high ethical and artistic quality standards in all its clown programmes within the group.

Today, RED NOSES Clowndoctors is one of the largest clown doctor groups in the world with local organisations in 11 countries. In 2019, our international team of 437 clowns brought joy and laughter to more than 569,000 people – and that in 676 medical and social institutions. The RED NOSES group has developed a wide range of specific formats within its programmes for all major beneficiaries: sick children, senior patients, multiply disabled children and rehabilitation patients, as well as people in vulnerable situations. Since 2014, RED NOSES Clowndoctors International also works in cooperation with international aid institutions and sends specially trained clown teams on Emergency Smile missions to crisis areas.

1994: Foundation of RED NOSES
Monica Culen (Managing Director) and Giora Seeliger (Artistic Director) founded RED NOSES Clowndoctors in Austria. It was amongst the first hospital clown programmes to come into operation in Europe. Within a few years it developed into one of the leading organisations in this field, setting benchmarks in artistic performance and professional structures.
1996: Foundation of First Partner Organisation
Due to our geographical location, an obvious sense of responsibility evolved towards our neighbouring countries in Central Europe, where the situation in hospitals was still very difficult for sick children. PIROS ORR was founded in Hungary, making it the first partner of RED NOSES Austria.
1997-2002: Professionalisation of the International Movement
Urgent cries for help in supporting the development of professional clown care programmes from other countries increasingly reached the RED NOSES management in Austria. A structure was therefore needed to build up and monitor high quality artistic and scientific healthcare clowning programmes outside of Austria. In 2002, ZDRAVOTNÍ KLAUN successfully started in the Czech Republic.
2002: International School of Humour
The RED NOSES International School of Humour (ISH) was established in 2002 as the professional training centre for all artists belonging to the RED NOSES group. ISH not only provides a curriculum which ultimately leads to the RED NOSES Clown Certification, but it also offers our artists the opportunity to work with the best international teachers in the performing arts.
2003: Foundation of RED NOSES Clowndoctors International
RED NOSES Clowndoctors International (RNI) was established as the headquarters of the RED NOSES group in order to cope with the growing demands for assistance from other countries. RNI also diversified its healthcare clowning programmes to not only reach out to sick children in hospitals but also to senior citizens and children with disabilities.
2003-2004: Growth in Central Europe
In a short period of time, further RED NOSES organisations were established in Germany, Slovenia and Slovakia. It was a challenging task to develop these new organisations as it involves - as always - setting up a proper legal structure, efficient governance and financial systems, and building up the programmes with professional clown teams.
2010-2013: Further International Expansion
A RED NOSES organisation opened up in Croatia in 2010 and at the same time, the first steps were taken to initiate the establishment of a branch office in the Palestinian Territories. The new Polish organisation was in operation by 2012 and in 2013 we welcomed a Lithuanian clown organisation into the RED NOSES group.
2013: Start of Emergency Smile
In 2013, the Emergency Smile programme was developed to send specially trained clown teams into acute and chronic crisis areas in cooperation with international aid organisations. The tailor-made Emergency Smile activities provide a sense of “normalcy” in abnormal situations through humorous and self-expressing activities, which help to alleviate fear and distress.
2017: Jordan joins the RED NOSES group
Jordan became officially one of the 11 local organisations of the RED NOSES International Group. They now contribute, together with RED NOSES Palestine, to spreading the joyful RED NOSES mission in the Middle East.
2018-Present: RED NOSES develops into Global Movement
RNI and its local organisations continue to enhance and deepen their strategic cooperation in order to reach out to more people in need of joy, develop new formats and ensure the highest quality of impact for our target groups. The RED NOSES group is spearheading the development of the healthcare clowning sector by creating international and interdisciplinary synergies, investing in research and evaluation, and advocating for a holistic and patient-centred healthcare environment globally. We tirelessly continue to empower people to rediscover moments of joy and happiness so that the world becomes more optimistic and humane.

We use cookies to ensure that we give you the best experience on our website. If you continue to use this site we will assume that you are happy with it. More information
abaton-monitoring